Anything Could Happen (Part 2)

We were at a party because of how a dart landed. Doctor Belloq, having just returned from a country that outlaws alcohol(!), was making up for lost time. Quickly. With tequila. It was not long before she was in this sort of condition:

And me, well, I called tails, which meant I’d be staying sober.

When my date could no longer stand upright, a friend and I removed her to a couch upstairs, where we paid somebody twenty bucks to guard her against potential rapists. Honestly, I don’t know how we decided the guard wasn’t himself a potential rapist, but we did, and it turned out for the best.

Please don’t ever mention that part to Doctor Belloq.

I fished a cheap skinny cigar out of my pocket and worked at getting it out of its wrapper.

…started lighting my cigar…
…and slammed directly into my brother, Anthony.

It was the first time I’d seen him since August! It was August, you see, when he stole my wife, and that had really cut down on the family get-togethers.

Anthony looked at me. He looked at my cigar. He wrinkled up his nose and he said, “You smoke?”

I exhaled and shrugged. I said the obvious: “You steal people’s wives?”

Then I flipped a coin to determine what would happen next. If it had been heads, I would have gone back inside right there and then.

We were in Dave’s back yard and it was cold and we could hardly see, but somehow we found a couple lawn chairs and we sat down and started to talk.

We went on talking for a long time. I cried a lot, which is something I do not normally do, but all that talking made me realize how much I had missed him. I missed my brother. I missed my kids. I missed my wife.

Things were sort of a mess, but still, it was a good talk. A valuable talk. We talked about all sorts of amazing things, the way we should have talked years ago. Someday, I’ll tell you more about it.

At some point, I started fading off to sleep.

I heard Anthony say, “She really, really, really hates you, you know.” “She”  being Dana, of course, who used to be my wife, and still was, in a few states. Still is, even.

Then he said, “She’s inside somewhere, you know. At the party.”

Did you ever see that movie, Pulp Fiction? The part where they stab Uma Thurman in the heart with a syringe full of adrenaline? In my head, that’s how I picture what happened to me when Anthony said Dana was inside.

It was dark and I could not see Anthony. His voice came at me from somewhere, though. It said, “Yeah. She wasn’t feeling well, so she was going to go-”

“-upstairs?!”  I interrupted him, pointing back frantically at the house. “Upstairs to the big couch?”

I started running back to the house. I said, “Upstairs with my… With my, um…” – Grandpa’s word for it was the only one that came to mind – “…lady friend?”

I must have made a lot of noise coming in the back door, because by the time I got to the top of the stairs, Doctor Belloq was there to block me, looking remarkably sober. Dana was way behind her, still sitting on the couch. The guard I’d paid (that bastard!) was nowhere to be seen.

I sputtered and I pointed a lot.

Doctor Belloq said, “No. Get the fuck out of here, Katy.”

She said, “Go down to the van and call your lawyer. Wake her up and tell her to start the paperwork.”

She looked back at Dana and whispered to me, “I’m five minutes away from getting you your kids back.”

I reached into my pocket and pulled out a coin to flip. Heads, I go to the van. Tails I cause a scene.

I went out to the van. 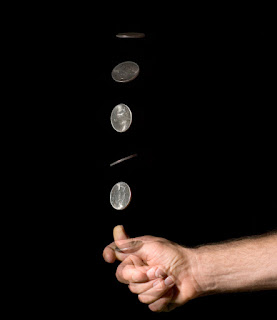