If you read Part 2 without reading Part 1 first, well, that is just like cutting in line, now isn’t it? We take cutting in line very seriously around here. Do not test us on this. Go read Part 1. Go! We will still be here when you get back.

Back when 3400 Montrose was mine, I usually slept on the fourth floor of the building, right there at the northeast corner that overlooked the Kroger store next door.

The room I slept in, it was completely sealed off, with no doors to the hallway or to any other suite. I had to climb down through the ceiling from a utility closet on the fifth floor to reach it.

It stank. Whenever I slept there, I stank, too.


I still have the master keys to the whole building. Right here. I keep them with me even after all of these years, just in case. I figure if ever everything else in my life falls through, I still have the keys to the bathrooms for 3400 Montrose, you know? I mean, you never know…

I do not suppose the keys to the bathrooms for 3400 Montrose would do me much good now.

I went back there again today to take more pictures. Those bathrooms are gone, baby. The room on the fourth floor – the one I used to sleep in? – that’s gone, too.

They used to be mine. The bathrooms, the sealed room, the whole building.

Tommy stayed down on the second floor and he was dying in slow motion and I had his master keys. I just had to make sure nothing bad happened at night, and so long as I did, the building was mine. I could stay. I could sleep anyplace I wanted. It was mine.

Have I mentioned it was mine?

That was the deal. That is what Tommy told me.

So for two years and six months, there was no trash and no cops and no spray paint at 3400 Montrose. I made sure of that. Oh sure, there was prostitution and there were drugs and sometimes – rarely, but sometimes – the whole place reeked of jazz musicians a-go-go.

There were makeshift flophouse rooms and there were defenestrating fags. But by God, there was no trash, no cops, and no spray paint. Not on my watch. 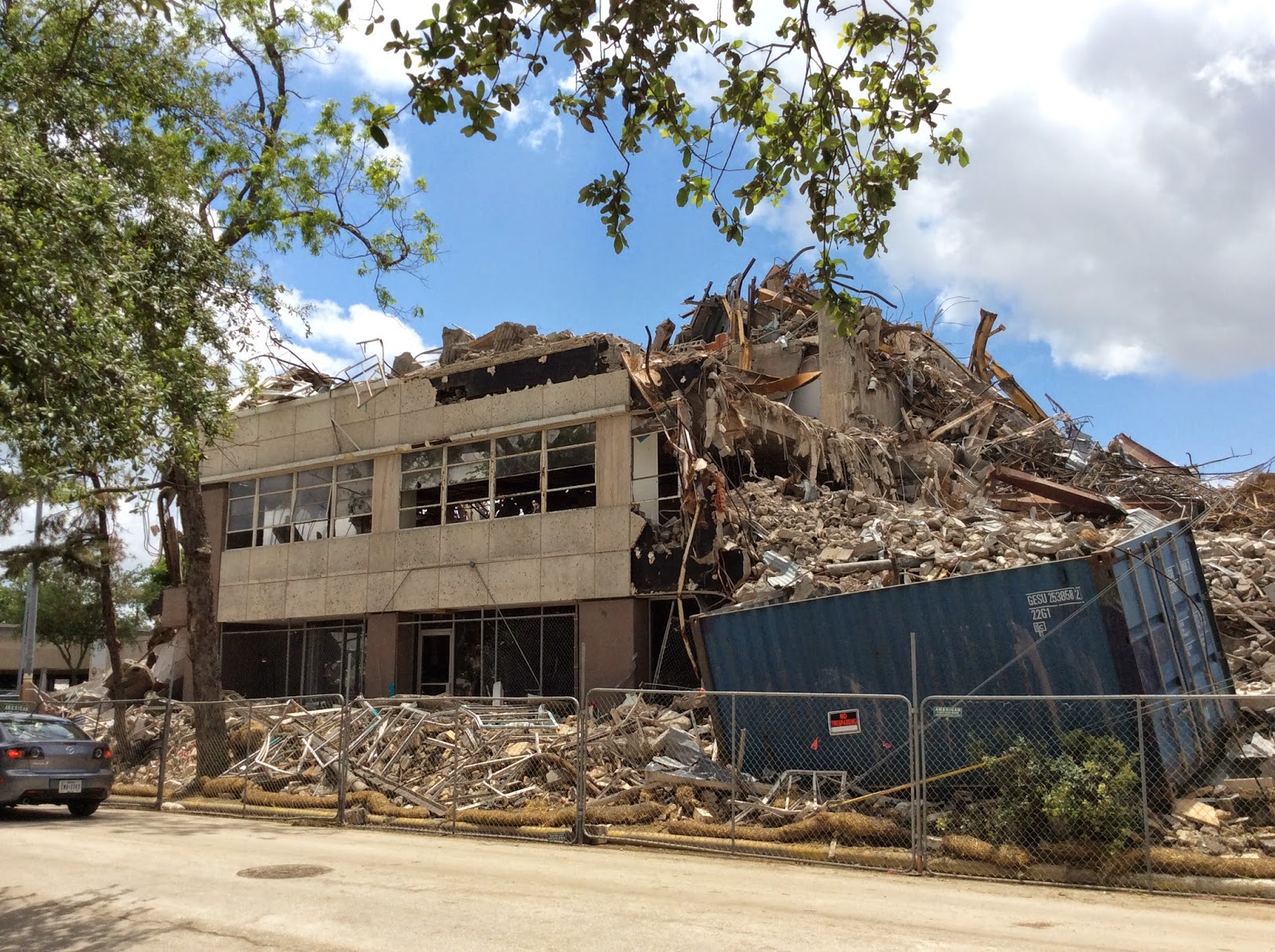 I remember. Now that it is over and done, I mean, I remember every nook and every cranny of those ten floors. Every rat, every crumbling asbestos tile, every oozing black mold bubble pop. Flashlights reflecting off eyeballs looking out from black corners where nothing and no one should have been. Ladders punched up through utility closets that no one else knew about. Splinters. Strange scampering sounds in the walls.

It was all so very cool and I had someplace to sleep.

It was so cool.

Time went by and Tommy died and I met Dana. The building went into foreclosure six times in just two years. Then the City condemned the elevators. Then all the businesses moved away.

One night, I was standing out front when the entire face of the ninth floor fell off and nearly landed right on top of me. And although I am not one to believe in signs, I took that as a sign and I got out while the getting was still good.

I always thought I might go back there someday and have another go at it, but it seems like this might be the end. I doubt they are going to allow me to climb around inside the walls of the 30-story luxury apartment tower that is replacing my 3400.

So there is no reason, I suppose, to drag out this goodbye song for any longer. Really, it’s all been downhill since the line about “defenestrating fags,”  anyway.

Email ThisBlogThis!Share to TwitterShare to FacebookShare to Pinterest
Labels: montrose, robyn hitchcock, this is the end