There’s a World Going On Underground 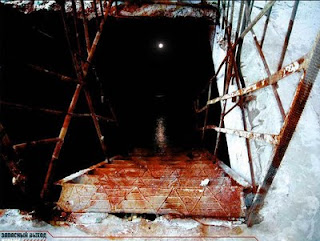 Finding that cricket was the important thing. It was the turning point, the morale boost I’d been needing for several days.

It’s funny how that works, idn’t it? How something so small – as literally and figuratively insignificant as a cricket – can loom so large, psychologically speaking. How it can make its appearance and save the day at just precisely the right moment.

I mean… a cricket!

But it was 2 a.m., and me and Dwayne the Security Guard and Marty the Residentially-Disadvantaged Cripple were taking turns with the flashlight in the tunnels beneath downtown Houston, trying to find somewhere with a shower in it. And that’s when I saw the cricket.

And so I hooted and I hollered and I snatched the little hopping dude up off the ground before Dwayne or Marty knew what was going on, really, and then we found us a little spot at the bottom of a stairwell a little ways down from there. Dwayne and I stretched out our legs and we touched feet to form four walls of blue jeans all around that cricket, so he couldn’t hop away.

And then I reached into my backpack and I pulled out this little box. I opened it. It was just a little box like had probably housed a necklace or… you know, something like that, originally. I cupped my hand over the hairy thing inside, lifted it and I set it down in the general vicinity of the cricket I’d caught.

And there she was! Saint Athanasius the tarantula.

The cricket wandered off and away, and I tried to corral it back towards Saint Anastasius with a ball point pen. I had the ball point pen, I mean. Not the spider. Dwayne the Security Guard and Marty the Residentially-Disadvantaged Cripple kept their eyes fixed on the tarantula at all times.

“So,” Dwayne said, never moving his eyes from the spider. “What I don’t understand is, aren’t you married to two people? If one kicks you out, can’t you just go live with the other one?” 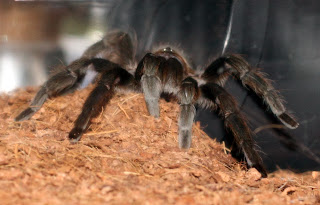 The cricket was hiding from me directly beneath Saint Athanasius’ many legs. Saint Athanasius herself, honed by millions of years of evolution to be efficient and brutal predator, was lifting individual legs – first this one, then that, then that, and so forth – so as to avoid touching the cricket. Hell, the cricket was the safest living thing around there. At this rate, I was going to die sooner than that cricket.

I said, “Dana kicks me out for a week or two at a time once, maybe twice a year. Sometimes more, sometimes less, all depending on what it is she’s caught me smoking. But this time! This time, I figured HEY! I have a back-up ball-and-chain! You know?”

Saint Athanasius was very, very slo-o-o-owly – almost imperceptibly, really – going through some sort of extremely convoluted exercise with all her legs to make her way away from the cricket. Although I couldn’t be sure, the cricket looked to be attempting to give chase surreptitiously.

I said, “So I did what any good spouse would do. I headed over to Aesop and Anthony’s house. I walked right in and I called out, ‘Honey! I’m home!’ Just like it was Ozzie and Harriet or the Cleavers or… whatever… The Huxtables, maybe…”

When the cricket brushed up against Saint Athanasius this time, the tarantula sunk a quick fang into it, tagging and then releasing it. You ask me, I think she just wanted the cricket to leave her alone and hoped this non-lethal injury would end the matter.

But the cricket, he seemed eager. He came back around, basically harassing the spider now.

I said, “And what does my husband of four months – four months! I mean, we’re newlyweds! Newlyweds! – What’s he say to me in response? Hmm?”

My companions… I don’t even think they heard what I was saying by this point. Which is just as well, really, because I was mostly talking just to get it out and not to be heard. The wheels on Marty the Residentially-Disadvantaged Cripple’s wheelchair squeaked a little as he pushed himself closer to the vermin between my legs…

I said, “My husband, Aesop, says to me, ‘You can’t just move in here, Katy! This is my home with Anthony. This is our home, not a college dorm’.”

Everything was still for a second or two, and then Saint Athanasius made her move. She hopped and then a couple of her legs and a couple of the other things that looked like legs cupped the cricket as she sank her fangs deep into it. And that cricket, why, he twitched for the last time and then turned white and sort of crumpled in upon himself.

Now, me, I’d seen it a hundred times or more, but Dwayne the Security Guard and Marty the Residentially-Disadvantaged Cripple, they were most mesmerized by the show, so I kept right on talking.

I said, “My own husband! Won’t let me stay with him on account of his homosexual relationship!”

I said, “I tell you, this is yet another prime example of how gay marriage is undermining traditional heterosexual marriage in this country…”

The show was over. Saint Athanasius was finishing off the cricket and I was finishing off my story. I was back to thinking about finding somewhere to take a shower. As it turns out, daily showers are the biggest hurdle to my living permanently in a sort of gypsy state, as a land pirate or such…

As I set Saint Athanasius back in her box and her box back in my backpack, it hit me: “Gyms!”

Dwayne the Security Guard held the flashlight as we came to a crossroads in the tunnels. “Which one d’ya think, little lady? Haynes & Boone? Baker Botts?”

I chose a direction, sort of randomly, and off we went. Dwayne the Security Guard. Marty the Residentially-Disadvantaged Cripple. And me.

Oh, and Saint Athanasius, too, of course.
Posted by Unknown