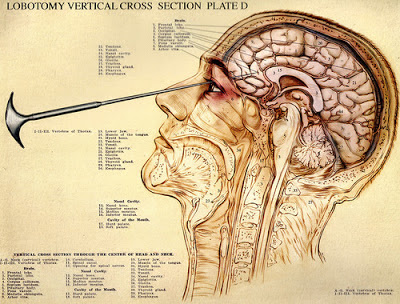 I am standing here now, with all of you fine, fine folks around me, and I must admit I’m feeling overwhelmed. I am humbled by this honor. Of all the people in the world they could have chosen, they chose me. Me!

And so today, I will be the one giving you the grand tour of Katy’s Haus of Corrective & Reparative Therapies. I pray that I am up to the task.

So come along. Right this way!

Now, I could stand here and I could bore you with pointless facts and hollow dates and dull statistics. I could rattle off the history and the mission of Katy’s Haus of Corrective & Reparative Therapies – founded in 2012 to normalize society and wipe out the abnormality plaguing the Western world, blah blah blah. Hell, I could even give you all the science behind what it is we do.

But if I did that, do you know what would happen? Do you? I will tell you: If I did that, you would fall asleep and you would not donate a dime and at the end of the day, the world would remain just that much more abnormal for my laziness. But me, I was chosen – chosen, good sir, and do watch your head! – and I take my job very seriously indeed.

I am going to bring you face to face with a few of our fully corrected and fully repaired success stories, with a few of – Oh! What a happy coincidence this is! Here come Jack and Wendy Torrance now. Wendy, why don’t you tell these fine folks a little about your son, Danny? 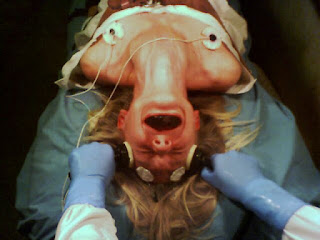 “Well, when our Danny was young, at first he seemed just like all of the normal kids his age. But then, when he got to be, oh, I don’t know, maybe he was six or seven, Jack and I began to notice that his favorite color was… orange. And this, well, this seemed a little off to us, so we talked about it a while and finally we brought him to Katy’s Haus of Corrective & Reparative Therapies to see what they thought.

“The experts here told Jack and me that our concerns were justified and that Danny had something called CFI or ‘Color Favoritism Imbalance’ and that he was going to have an awful hard time in life if we did not get it fixed. As it turns out, hardly anyone in the world’s favorite color is orange. CFI, if left untreated, can lead to… to… Oh, it’s just too horrible to even think about our precious Danny going through that!

“Here at Katy’s Haus of Corrective & Reparative Therapies, they took the time to hook electrodes up to our little Danny’s head and genitals, and with only six therapies a day, in twelve weeks they were able to cure his CFI completely.

“Jack and I were both shocked by the results! It’s like the Color Favoritism Imbalance was never even there. Now, his favorite color is red or sometimes yellow or sometimes both red and yellow at the same time. And as soon as he regains the use of his left arm, he’ll be back in school and we just know that things will get better for him.

“Thanks, Katy, for making our Danny normal!”

Isn’t that a beautiful story? Ahem. [[Cough.]] Pardon me, please. You know, this doesn’t usually happen to me. I pride myself on being immune, on never getting all caught up in emotions like this. But when I see… When I see Jack and Wendy, I tend to get choked up, even now. Even after all of the lives this place has changed.

“Hello, I’m Alex, and I used to be a m-m-musician. I know, I know, it’s hh-h-hard to believe. Me, a m-m-musician!? Or I guess maybe I just thought I was a musician. That’s how confused I was. But m-m-musicians, they don’t live as long as other people do and they tend to use drugs and suffer f-f-from m-m-mental problems. Oh, they try and start the next generation out early, sneaking their m-m-music classes into our kids’ schools. But if everybody was a m-m-musician, then there wouldn’t be anyone to deliver pizzas or cure AIDS or grow corn, would there? D-d-did you ever think about that?

“I never did, until I came here. B-by that time, it was almost too late for m-me.

“Here at K-k-katy’s Haus of Corrective & Reparative Therapies, they put me in a dark room and they told me they were going to kill me unless I did what they said. Then they abandoned me for three days without food or water, and every time I started to hum, they would come in and break one of my fingers.

“After that – because I was such a hopeless case, really – they chopped out the part of my brain that governs music and c-c-creativity and found me a job making calls for a c-c-c-collections agency. 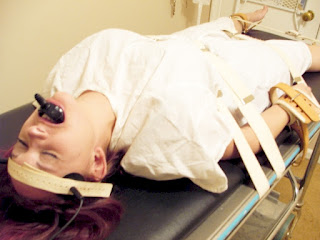 Thank you, Alex, and that will be enough. Good job. Here’s your cookie and be back at three for the next tour, will ya, please?

Miss Hayes had made great strides – yes, great strides indeed! – towards correcting a condition whose name can hardly be uttered aloud in polite or mixed company. Dolores?

“Good afternoon good afternoon i am miss dolores hayes but maybe not really because i will be changing it to salma or maybe britney changing my name i mean because dolores hayes was a redhead and i am not a redhead.  Please do not call me a redhead because the universe does not want redheads and they showed me that in a big book whose name i have forgotten just now but it was right there in black and white you can rest assured.

“And did you know that redheads will go extinct in the next hundred years and they do not add anything of note to human society yet they are responsible for a disproportionate amount of the skin cancer in the united states and that costs you and me billions of dollars as taxpayers?

“And the old dolores hayes was only me because i got screwed up as a child somehow like maybe abused or maybe something i can’t remember what just now but in those days i walked around loose on the streets with my unnatural hair and still i expected the same rights as everyone else until i came here and they told me i could change if i wanted to change and be set right and if i wanted to be set right and what right does someone else have to tell me not to?

“They started with electrolysis so all the bad hair fell out and they did some other things they told me not to tell the tourists about or even my family about and then i prayed very hard for a very long time more days than i have fingers and then when my hair grew back it was this beautiful shade of white! White! And thank god that i have those unthinkable redhead days behind me because now the kingdom of heaven awaits and i am cured for all eternity and i am the beautiful woman you see before you and not that horrible unnatural abomination dolores hayes no nevermore!”

By now, I trust the importance of the work we do here is sufficiently clear. We straighten what is bent. We raise what is fallen. We take the abnormal and we make it normal again.

We save lives here at Katy's Haus of Corrective & Reparative Therapies by making you by what you should be - exactly like everyone else.

And now – oh, watch your head there, sir – we ask you to consider giving generously. Help save the weird and the crooked of this world! Reach down deep into your heart and show how much you care. For those of you writing checks, that’s “Katy’s” – K-A-T-Y, not K-A-T-I-E – Haus of Corrective & Reparative Therapies. All gifts are tax-deductible.

Consider mentioning us as a beneficiary in your Will!

Now, come right this way and we will make a quick stop by the gift shop…