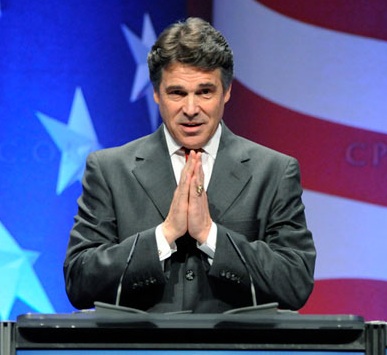 I watched some of these mad people talking on television and although I can’t be 100% sure, they mostly seemed mad about the governor of Texas standing up there on the stage at Reliant – (have I told you how much he loves bigamy?) – and he was praying, too. And that part sort of made sense to me, in a way, because the governor had issued a prayer proclamation this past April calling for us Texans to telepathically petition the force behind the universe to make it rain in our drought-stricken state.

Yet here we are four months later and I’ve hardly seen a drop of rain yet!

And the more I thought about it, the more it occurred to me that – heaven forbid! – our good Governor Perry might be a prayer-buster! You know, like a doubting Thomas cynic type that mucks up the works by his mere presence?

Now, you might not know this about me, but… I am not the most conventionally religious individual residing in this fine state. But I haven’t really made my mind up about anything for certain, either. A good argument, a lofty spiritual experience or, hell, even a powerful anecdote comes along and… I could be persuaded.

And beyond that, it’s American blood that runs through these fine veins of mine, and as an American, I drank in the spirit of capitalism with my momma’s milk. I know that free and fervent competition makes the cream rise to the top and the dross go begging for quarters out on McGowan and Main.

Don’t get ahead of me here…

‘Cause it took me a while to connect the dots – from Rick Perry to Texas to America to competition to God – but when I did, it all seemed so obvious.

I needed to start small with the prayer thing, find a deity with a willing ear, and then move up to saving the country or making it rain as I got better. I had to call for:

KATY’S INTERNET PRAYER RALLY
TO MOVE THIS SIZE 3 FLIP FLOP
A QUARTER OF AN INCH
(IN ANY DIRECTION)!

At noon this Saturday, August 13, 2011, I urge all of you to JOIN ME in offering your prayers and petitions to the Christian God –

Ø  the Power that blew across the waters to separate the heavens from the earth!
Ø  the Force that parted the Red Sea for the Israelites and then drowned the Egyptian soldiers!
Ø  the Fire behind comets and the planets and supernovas and black holes!
Ø  the Ground of all Being, the consciousness behind all consciousnesses, the which of which there is no whicher! and
Ø  the Mystery behind fucking magnets (how do they work?)

– to move this humble children’s size 3 flip flop a quarter inch (in any direction). 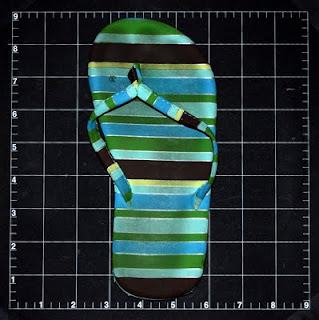 And if God can’t or won’t do it, I (dare I say “we”?) will begin – on successive Saturdays – to make our way through Allah, Satan, Cthulhu, and the Stay Puft Marshmallow Man.

All participants are asked to open their minds, hearts, and their souls to the possibility of this exercise working on any given Saturday, and I’m going to allow for well-timed earthquakes, synchronicity/meaningful coincidence, the effects of cars running into my house, or act of house pet in moving the flip flop.

And now, if I may, I’m going to cut the mad people off the pass. The people who get mad about people like us, who choose to pray together on our own time. To you I say: I’m open to suggestions, friend. If you have a horse or a god even a mental trick you would like to place in the running for a shot at moving this children’s size 3 flip flop a quarter inch (in any direction) through the Power of Collective Prayer, drop me a line. We’ll add it to the list even if a prior god has already tossed the damn flip flop clear across the room.

__________
**Event contingent on Governor Perry not yet having arrested me, my wife, my husband, and my husband’s husband (who also happens to be my twin brother) for Double Bigamy (All the Way).

***I will try to begin posting regular updates on the Internet Prayer Rally here!
Posted by Unknown