A New Experiment in Living 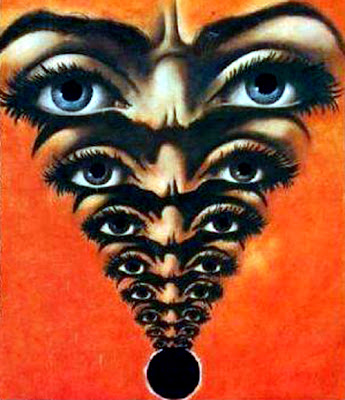 There’s a little monkey-man who lives out near our front gate, just under the mailbox. He is very little, very monkey-like.

He’s the one who told me I should go away and move to the underground.

Now, you might say this sounds crazy. And I admit that normally, I would be tempted to agree. But Dana, here’s the thing: That little monkey-man was right. I have to go. I must.

Life is too short to be spent inside of houses.

I have discussed this at length with the little monkey-man who lives out near our front gate.

Here is what the little monkey-man said about that. I pass it along to you now so that – when your people talk to you and say that I am a crazy human being – you will stand ready with an appropriate response.

1.  The response. Just last Thursday, the little monkey-man told me, while smoking his strange wooden neon pipe beneath our mailbox, that I cannot be crazy.

His logic was cogent. Irrefutable.

He started with this: “You say to me, Katy, that the act of going away and moving to the underground labels you a crazy person. Yet you would agree with me that crazy people – that is, those human beings whose minds work in a manner contemplated and recognized and classified by the Diagnostic and Statistical Manual of Mental Disorders – do not know they are crazy.” 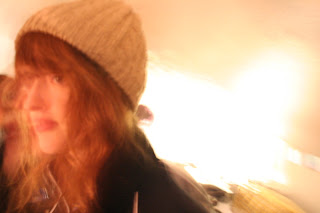 Then he said this: “You would also agree with me that these so-called crazy human beings do not choose to leave their families and their houses and to move to the underground. They become ‘homeless’ – for lack of a better word – because they get lost and they get confused and they wander away without their medication.”

And the little monkey-man said this: “But you yourself, Katy, you are not lost. You are not confused. Unlike the crazy person, you know how crazy all this sounds, yet still voluntarily, proactively, and with much forethought, choose to move out of houses and go into the underground. The crazy person is incapable of such a decision. Ergo, you are not crazy.”

Then, his point having been made, the little monkey-man crushed out his pipe, rolled himself into a ball, and soaked back into the soil beneath our mailbox.

See? I’m not crazy after all.

But then there is another Houston that exists only an inch – maybe less! – outside of your peripheral view.

First you turn right off of Travis, near the old Gulf Oil building. You let your mind wander, sort of floating free, like maybe you are looking at one of those deep 3D autostereogram paintings from the Nineties. You let your mind float free and you let yourself get lost. 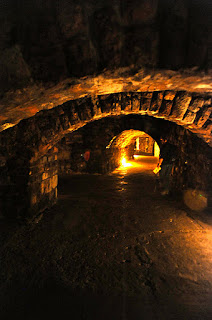 Beneath, beside, betwixt or maybe between the downtown Houston stuff you know, there’s an older place. There’s the skeletons of the Enronoic Era. The powers behind the last war and the ones that will make the next one. There’s landmarks of the Golden Seventies, when Saudi princes flew in on Friday night to pick up Texas girls and snort away millions.

But there, deeper down and buried, there’s the Allen Brothers, washed up from the bayou, finding strange, not-quite-Spanish structures of unknown architectural origin.

And now Dana, you have to climb quite deep to get there. There, there are peoples who have not seen the bright downtown like you and your people know for generations.

But I can live there. And I am going to.

That does not make me crazy, Dana.

This time, your people will be right.

But I have my brain.

I have all that I learned last summer when I was there.

I have Captain Torus – that wise old anthropologist with his ankh staff and his sidearm and his knowledge of the Rules of the Streets and Side Tunnels – to protect me.

I have the confidence that leaving houses and moving into deep Houston is something I must do.

Maybe that makes me a little crazy. But only a little tiny bit.

4.  What I know. Dana, I know I love you. And I know I love our life. I love our family. That is a crazy thing for me to say, in light of this whole voluntary homelessness thing (see above).

Tonight, I pack my things. I will place Saint Athanasius in his little box in my pocket. And it is then that the little monkey-man – the one who lives out near our front gate, just under the mailbox – will lead me down into the labyrinth where the crazies and the criminals and the deadbeats and outcasts go when they go away from houses and from clocks and stoves and from bug spray and central A/C.

I don’t care what the little monkey-man says, I know that this makes me completely, fantastically crazy.

But I am going!