Why Mia McKenzie Tried to Have Me Lynched

It was Monday night and as I sat down to check my twitter feed, I discovered that everyone in the world had suddenly gone apeshit.

I do mean everyone: Black people, white people, pink people, green people, people of all the many shades of brown, as well as liberals, conservatives, the young, the old. You name it.


Now, “going apeshit” is a godawful thing to say about apes. They’ve never really done anything to deserve it. After all, when sufficiently riled up, human beings are ever so much more likely than the average ape to throw something at you, and when they do, it is likely to be something much more godawful than mere apeshit.

Still, I use the term “going apeshit” here because it captures my meaning and because my ape readership is so negligible as to be safely disregarded.

On Monday night, all of the apeshit appeared to be about something that had happened in a small town in Missouri. That was where a grand jury had just decided not to make a police officer stand trial for shooting a young black man to death.

One person whose tweets I read was Mia McKenzie, whose twitter handle is @blackgirldanger and who says she writes in order to “amplify the voices of queer and trans people of color.”

An oasis of lower case letters amidst all of the apeshit, Mia tweeted this: 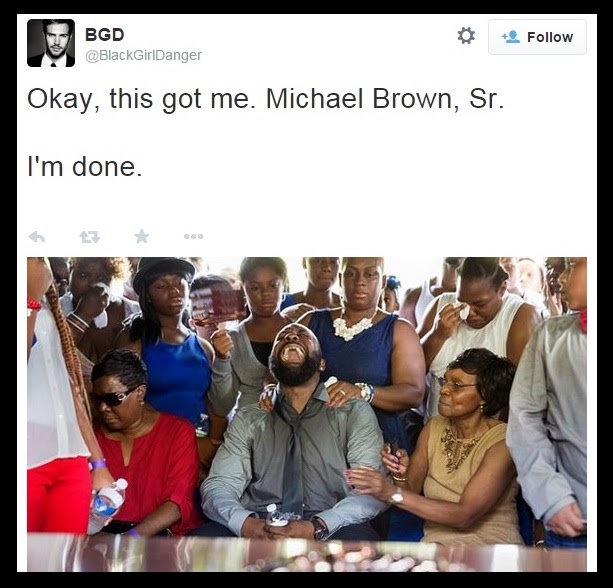 Certainly, it also got many of Mia McKenzie’s 25,000 followers, and many of them said as much. When she said it got her – when she said she was done – they said, “Me too.”

Well, apparently, this unwavering show of consensus and support by her twitter followers angered Mia. She tweeted this: 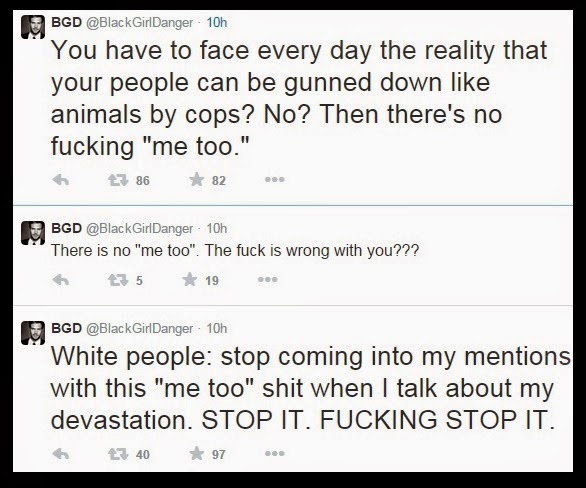 Now, it is my belief that everyone and anyone can feel the anguish that is captured in the face of the father in the photograph. It is universal. It is primal. You do not need to have a special life experience or an entry pass to feel it. I myself have known house pets who would have reacted to a lot less than the anguish expressed in that photograph.

Mia’s anger at her bobble heads – at her me-too-ers – therefore struck me at that moment as being… misdirected. Although I was not one of those who had replied with “Me too,”  I now replied to her attacks on the me-too-ers with this:

Still I replied. Then I shrugged. Then I headed upstairs to put my kids to bed.

Upon my return, twitter informed me I had 516 new notifications.

This came as a surprise, as I generally receive between three and five twitter notifications per week.

I dug down through the piles of replies, mentions, and a few new follower requests until at last, I stumbled upon this:

Some employed unflattering references to my sexual orientation.

One even tweeted my home address along with some advice about what could be done with it.

Still, I didn’t say much until I hit 804 notifications, when I acknowledged my newfound notoriety by tweeting this…

…which garnered this response from Mia… 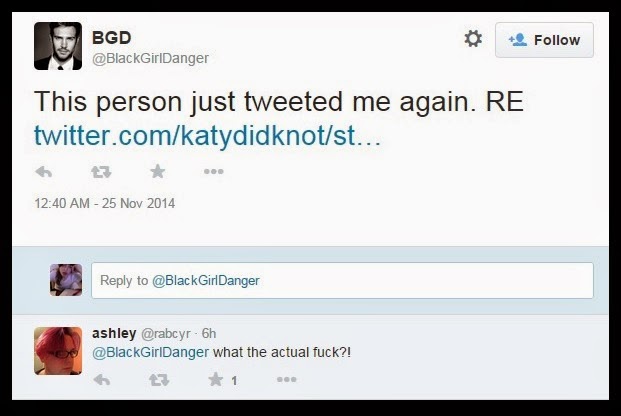 …as well as an additional 200 insults, slurs, threats of violence, and variegated shows of outrage.

Some time went by and then it was Tuesday and the angry words kept rolling in, such as these by someone calling herself @miafan2014:

And when my nine-year old daughter went out to check the mail on Tuesday afternoon, someone shouted this from a car waiting at the curb: “Your ma needs to learn to start showing respect!”

Of course, there is no telling about this last bit. It could have been completely unrelated to the Mia McKenzie shenanigans. However, as a rule, random passers-by do not shout at my children out in public. I am about as uncontroversial as anyone could be while still maintaining a website called “Fascist Dyke Motors.”

So what, you might ask, is the takeaway from all of this? Now that my twitter notifications are back to normal and now that the excitement has died down and now that the worst of the tweets are all deleted, what is to be learned from this?

Or maybe just that when everyone is going apeshit, even agreeing with someone is not always a safe bet. 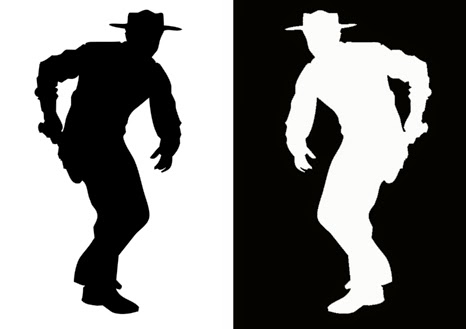 Mostly, I believe it shows that there are a lot of bad people in the world, and those bad people do not all stand on the other side of some random line from you. The enemy of your enemy might not be your friend at all, and she might even call 25,000 people to lynch you just for agreeing with her. She might even say, “Go get her… Don’t tag me,” which means she does not wish to hear about the godawful things her words inspire.

I read a lot. I think about a lot. I do not say much. And on nights when the apeshit starts to fly, sometimes I worry about how hard it is to tell the good guys from the bad guys...
Posted by Unknown