The Gospel of Life Ain’t Nuthin’ But Bitches & Money 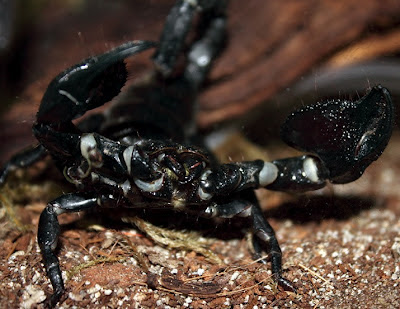 Today we will talk about a miracle happening right beneath our noses.

We have a scorpion who lives in our house. She is an emperor scorpion, and this means she is not at all like those pitiful, flat little things we sometimes see cowering about under the rosebushes at dusk.

The emperor scorpion is none of those things.

So there is this emperor scorpion and she lives in our house, beneath a chunk of driftwood inside of a glass aquarium. The name of this scorpion is Life Ain’t Nuthin’ But Bitches & Money.


The kids call her by the more school-friendly name, LAN B-BAM. 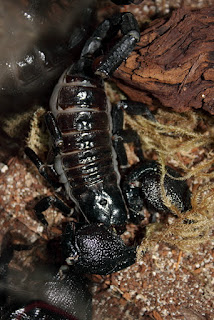 Life Ain’t Nuthin’ But Bitches & Money is everything we could ever hope for in an emperor scorpion roommate. She is quiet. Keeps to herself. She does not demand to be walked or petted or held. She has never asked us for a new bicycle or for swim lessons or that we run to the store for a loaf of bread right before bedtime.

You see, that’s just not how Life Ain’t Nuthin’ But Bitches & Money rolls.

Instead, she mostly hangs out beneath her piece of driftwood, thinking about whatever it is that an emperor scorpion thinks about, until such time as we drop a live cricket (or maybe two live crickets!) into the aquarium with her. It is only then that she announces her presence to the world by waving her large dark claws out from under her chunk of driftwood. It is only then that she charges out in all her armored splendor to chase down an unwary cricket.

Sometimes, there are as many as half a dozen school-age humans huddled around her aquarium when she does this. All the tiny humans, they squeal in delight and horror as Life Ain’t Nuthin’ But Bitches & Money makes her brief appearance.

“Run, Cricket, run!” some of the children shriek. These children we call naïve optimists and dreamers.

Recently, we noticed some changes in Life Ain’t Nuthin’ But Bitches & Money. 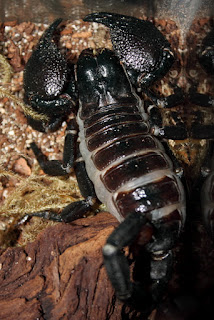 Her armor was not fitting as well as it used to fit. In fact, where the plates of her mighty armored suit were once snug and form-fitting, now we could see layers of flab hanging out. Life Ain’t Nuthin’ But Bitches & Money had gone soft.

This is not a surprising phenomenon in our house, for everyone tends to grow noticeably more rotund once they begin residing with us. But our fat cat is not an emperor cat. Our fat cat does not have a suit of mighty armor. Her name is nothing like Life Ain’t Nuthin’ But Bitches & Money.

But when we had done all that we could do – feeding the scorpion fewer crickets, making her run little laps around the bathtub three times a week – we found the emperor scorpion even fatter than when we’d begun.

We required help. We posted photos of her on the interwebs, on a forum where people post such things. And the response, it was immediate and it was overwhelming: “That scorpion is pregnant.”

But this could not be. At first, we all felt a little betrayed. Had Life Ain’t Nuthin’ But Bitches & Money been sneaking around on us? Had she been slumming it with those pitiful, flat little “scorpions”that we sometimes see cowering about under the rosebushes?

We went back to the forum and we asked, for by now, it seemed that the forum knew all. And the response, again it was immediate and again it was overwhelming: “Some scorpions can get pregnant multiple times over multiple years from a single coupling.”

And then, this: “Some arachnids are capable of parthenogenesis, giving birth without ever mating at all.”

It was a miracle. We had been chosen. We were a part of God’s plan. Our humble home would serve – it will serve! – as the holy site wherein the Lord again takes flesh unto His creation – this time as a scorpion (or, more likely, scorpions).

We fell onto our knees:

Hail Life Ain’t Nuthin’ But Bitches & Money, full of grace
The Lord is with thee
Blessed art thou among scorpions
And blessed is the fruit of thy womb, [name/s yet to be determined].

Holy Life Ain’t Nuthin’ But Bitches & Money, mother of god[s?]
Pray for us sinners
Now and at the hour of our death
Amen.

And now we wait, and now we try to prepare, but how is it possible to really prepare for such an event as this?

When the Lord(s) come(s) again in glory, will it signal the rising of the universal New Jerusalem foretold in John’s Apocalypse? Is this “merely” a New Testament reboot of sorts wherein the scorpions are the Incarnate Word?

Must these baby scorpions die for our sins? How would we ever break that to the children?

We have a scorpion who lives in our house. She is an emperor scorpion, forever Virgin, and all the angels and saints sing her praises. And all of us will sing her praises, too, if we know what is good for us.

For the time grows short, and this generation will not pass away until great events have taken place.

Now, if you’ll excuse me, I have work to do. Life Ain’t Nuthin’ But Bitches & Money is eating for between five and fifteen, and our little unborn Christs are hungry for crickets. 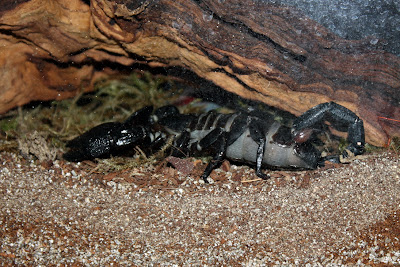